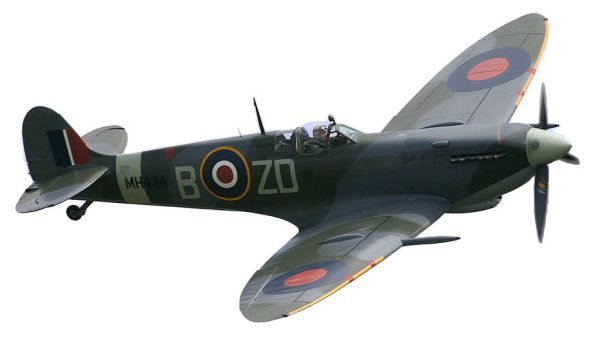 A British single-seat fighter aircraft used by the Royal Air Force and other Allied countries before, during and after World War II.

The Spitfire was designed as a short-range, high-performance interceptor aircraft by R. J. Mitchell, chief designer at Supermarine Aviation Works, which operated as a subsidiary of Vickers-Armstrong from 1928. Mitchell continued to refine the design until his death in 1937, whereupon his colleague Joseph Smith took over as chief designer, overseeing the Spitfire's development through its multitude of variants. After the Battle of Britain, the Spitfire superseded the Hurricane to become the backbone of RAF Fighter Command, and saw action in the European, Mediterranean, Pacific, and South-East Asian theatres. Much loved by its pilots, the Spitfire served in several roles, including interceptor, photo-reconnaissance, fighter-bomber and trainer, and it continued to serve in these roles until the 1950s. During the Battle, Spitfires were generally tasked with engaging Luftwaffe fighters, mainly Messerschmitt Bf 109Es, which were a close match in ability. Many variants of the Spitfire were built, using several wing configurations, and it was produced in greater numbers than any other British aircraft.

"If anybody ever tells you anything about an aeroplane which is so bloody complicated you can't understand it, take it from me: it's all balls."

"Designers and Constructors of Naval Aircraft"