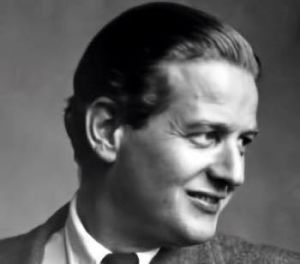 'Whether the project is a building, a chair or a textile... they are each expressions of the same search for harmonious balance between usefulness and beauty.'

German-born Hans Knoll was a member of a prominent furniture-making family. His father Walter C. Knoll, one of the pioneer makers of modern furniture in pre-Hitler Germany, produced early Mies van der Rohe designs in his Stuttgart factory. A man of vitality and drive, and disenchanted with Europe, Knoll went first to England where he opened his own interior design company, Plan Ltd. His stay in England was brief and in 1937 he came to New York. With his background in the production of furniture and his zeal for good design, he was ready in 1938 to form the Hans G. Knoll Furniture Company in small space on East 72nd Street. Hans originally intended to import European designs but because of difficult import conditions, he shifted his ambitions toward domestic products. As Hans expanded the scope of his company to include interior design projects, he hired a young Danish designer named Jens Risom in 1941 to help with space planning. The state of custom interior design led Risom to design new pieces of furniture for specific projects – the original Knoll furniture. At the same time, Hans created the company’s first manufacturing plant in an old dance hall in East Greenville, Pennsylvania. While the company grew quickly in its first few years under Hans’s leadership, it was Knoll’s association with Florence Schust, beginning in 1943, that propelled the company toward unparalleled excellence. (Florence and Hans were married in 1946.) Over the next nine years, and until Hans’s untimely death in a 1955 auto accident, the company grew substantially both in the US and abroad, with the establishment of the Knoll Planning Unit, Knoll Textiles, and a myriad of now iconic commissions. By 1955, Hans and Florence had established one of the preeminent and international design houses: the Planning Unit had begun work on Connecticut General’s headquarters, and the collection included designs by Mies van der Rohe, Saarinen’s Womb Chair and 71 and 72 office chairs, Bertoia’s wire-frame collection, Florence Knoll’s design, among others.

Scaled for the home and office alike, Florence Knoll's Model 17 Maple Desk fuses gracious form and an elegant use of wood.